Alpha Wireless, a Portlaoise based company which designs and manufactures base station antennas, has secured a multimillion dollar contract with telecommunications giant Samsung.

In addition, Alpha Wireless has announced significant investment from two venture capital funds supported by AIB Bank which will enable the company to meet the requirements of this important international commercial contract and allow the business expand its Irish operational capacity. The AIB funds are managed by Enterprise Equity Venture Capital who led this round, and ACT Venture Capital.

Alpha Wireless has produced the world’s first 2.5GHz 8 Port 90 Beam Forming antenna. This beam forming technology complements the next step in the evolution of 4G LTE, changing the way traditional antennas provide coverage. It has been rigorously tested by Samsung in the USA and selected from a small number of suppliers to form part of its next generation 4G LTE network.

According to Fergal Lawlor, CEO of Alpha Wireless, “This Samsung deal, along with other large operator deals, coupled with the investment from AIB supported funds places Alpha Wireless in a commanding position for the global antenna business. In just two months, we have grown employee numbers three fold at our Portlaoise base.”

Tom Shinkwin, a Partner in Enterprise Equity Venture Capital said: “This investment in Alpha Wireless reflects our confidence in the company’s international growth prospects. Alpha Wireless has built a very strong reputation in the marketplace, both for its innovative engineering abilities and its responsiveness to customer requirements. The global antenna market is estimated to be valued at $13.3bn and base station antennas, Alpha’s target market, represent a significant portion of this market. Alpha Wireless is a great example of an indigenous and innovative manufacturing technology business that has proven in a short period of time that it can sell and leverage its products into highly competitive overseas markets.” 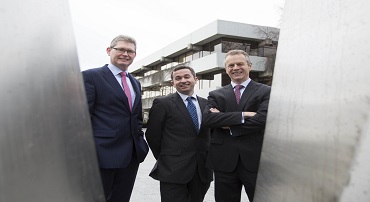