12 incredible Irish medical device makers you need to know about

Many Irish start-ups are now dealing in medtech, a growing industry in which innovation can have a profound impact.

This selection of young Irish companies all hail from the medical device sector, where clever gadgets are being dreamt up and put to good use in patients’ and doctors’ lives.

All founded within the last 10 years, these Irish innovators are engineering a better future for healthcare and medical treatment.

AventaMed, a Cork-based start-up founded in 2013, was a major attention-grabber at the 2014 Innovation Showcase, presenting a simple-to-use, hand-held device for inserting grommets into the ear.

The existing procedure requires general anaesthetic, hospital appointments and some time in an operating theatre. AventaMed seeks to make the procedure far simpler, safer and quicker, with a device that enables clinicians to insert grommets in a doctor’s office without anaesthetic and in under one second.

The company recently raised €1.3m for clinical trials. If successful, the device could be used in the more than 2m grommet procedures carried out throughout Europe and the US every year.

Founded in 2006 by Dr David Gillen, Blueacre aims to provide a dedicated, high-quality laser processing and consulting service. Through continuous investment in research, development and engineering, the company offers laser micromachining systems that are among the most advanced on the market.

The company has just secured a role in the €4.5m Openmind EU research project developing next-generation surgical devices with eight other companies from Europe. Blueacre is focusing on the development of guide wires, which play a role in minimally invasive surgical procedures.

Galway-based medtech company Capsos Medical is pioneering a new treatment for unblocking arteries. Headed by CEO Brian McLaughlin, the company is targeting chronic total occlusions (CTOs), which are complete blockages of an artery resulting in reduced blood flow and a lower quality of life.

CTOs are encountered in up to 30pc of all patients who undergo angiography. Capsos’ CapBuster solution is a balloon catheter and guidewire combination device that enables physicians to re-open the most resistant occlusions where a calcified cap has formed on the surface of the blockage.

Last year, the company raised €2.2m in funding from the AIB Seed Capital Fund to develop its innovative treatment. 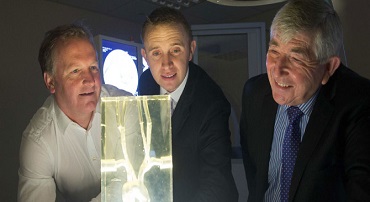 Brendan McLaughlin, CEO and founder of Capsos Medical, with Paul Dullahan from AIB and Rory Hynes from Enterprise Equity

One of the earliest-stage companies on our list, University of Limerick spinout Class Medical recently caught our attention at last December’s Innovation Showcase in Dublin.

Led by co-founder Rory Mooney, Class Medical attempts to tackle an age-old problem in medicine and the treatment of urinary conditions with a new device, the Trans-Urethral Catheterisation Safety Syringe (TUCSS) valve.

The TUCSS valve was built to improve patient safety and comfort when a urinary catheter is put in place, which is not only a notoriously uncomfortable procedure, but sees almost 300,000 injuries a year from improper urinary catheterisation.

Headquartered at University College Dublin, Neuromod devotes its time to the research and development of neuromodulation technologies, particularly for people suffering with chronic tinnitus.

For those with tinnitus, it involves a constant ringing in the ears, and Neuromod’s flagship non-invasive treatment is the Mutebutton device, which recently received €5.5m in financing from Fountain Healthcare Partners.

Aside from receiving this funding back in October last year, the company also celebrated getting a US patent for its technology in September, having a year earlier received a medical device CE mark in Europe.

The company has received FDA and CE mark approval for its flagship product, NeoClose, which semi-automates the closure procedure part of laparoscopic surgery, and it is targeting both the US and European markets.

Founded in 2008 by Barry Russell, who had previously worked with both Boston Scientific and Johnson & Johnson, by 2013 NeoSurgical had earned the silver emerging medical technology company of the year award at the Medical Technology Industry Awards.

Last year, the company became the first company to exit the 2009 Bank of Ireland Seed and Early Stage Fund after it raised €6m from US investor SAIG.

A Galway business, Neuravi made news last summer when it raised €19m for its stroke therapy device. Its EmboTrap targets blood clots, capturing them within the device and allowing for immediate restoration of blood flow while also cleaning up any particles disturbed during the clot removal.

Founded by Eamon Brady, who also acts as CEO, Neuravi’s 2015 clinical trials resulted in a bunch of partnerships throughout Europe.

Founded in 2011, Cork-based PMD Solutions has become one of the region’s most influential medical device manufacturers, particularly for its latest device – RespiraSense – which discreetly measures a patient’s breathing for the benefit of medical practitioners.

The company created 11 jobs in November 2015 following a €4.2m funding boost as part of the European Union’s Horizon 2020 funding programme, just as it was about to enter use in Ireland at Galway University Hospital and Cork University Hospital. PMD Solutions has also seen RespiraSense introduced to 10 hospitals worldwide.

A spinout from Trinity’s AMBER research centre, SelfSense Technologies has honed in on quite a universal issue: the grinding of teeth. Looking to aid what it considers to be 20pc of the global population, the company’s SmartSplint is a dental device that tracks and monitors patients’ overworked jaw.

Data extracted from the mouth is then run through SelfSense’s systems, resulting in information that can help dentists go about helping their patients.

The project has received more than €700,000 in funding from Enterprise Ireland, Science Foundation Ireland and the Health Research Board, with SelfSense now based in the NDRC.

Signum Surgical deals with perianal fistulas, a health concern that requires an incredible amount of surgical expertise to have even a chance of a long-term fix. For those unaware, these are essentially tunnels between the dentate line of the rectum and the external opening at the skin side of the buttocks.

This ailment requires surgery, often numerous times, but Signum’s surgically-implanted device aims to prevent reinfection of the tract and allows it to heal in a quicker time.

Having shown off its project at the recently-held Innovation Showcase in Dublin, the Irish start-up is seeking funding to allow it to negotiate the regulatory environment it needs to pass through to get its product to market.

SurgaColl Technologies spun out of the Royal College of Surgeons in Ireland back in 2010, with an idea for a medical device that would revolutionise the treatment of bone disease and defects.

The medtech start-up now develops two products: HydroxyColl, a bone graft substitute that can help to repair large defects in bone by encouraging the growth of bone tissue in areas of damage, and ChondroColl, which repairs damage to joints by stimulating the body’s STEM cells to regenerate bone and cartilage.

With its origins in a Science Foundation Ireland-funded project from the early 2000s, SurgaColl has gone from strength to strength, recently announcing the creation of 25 jobs over the next three years.

Hip fractures typically account for 20-30pc of all trauma orthopaedic bed occupancy, with some 2,500 hip fractures fixed annually in Ireland. The X-Bolt, which is already in use in Irish and UK hospitals, improves the efficiency of current hip fracture treatment and reduces the requirement for costly and often devastating repeat surgery.

Thornes previously developed and licensed the ankle treatment TightRope to a US multinational in 2003. To date, more than 120,000 Tightropes have been used worldwide, with many football and rugby professionals amongst recipients of the device, as it has been recognised as the new gold standard for ankle syndesmosis injuries.

X-Bolt has raised €1.8m in seed funding from the AIB Seed Capital Fund to support the attainment of FDA approval of the X-Bolt product in the US and to fast-track its export potential globally. 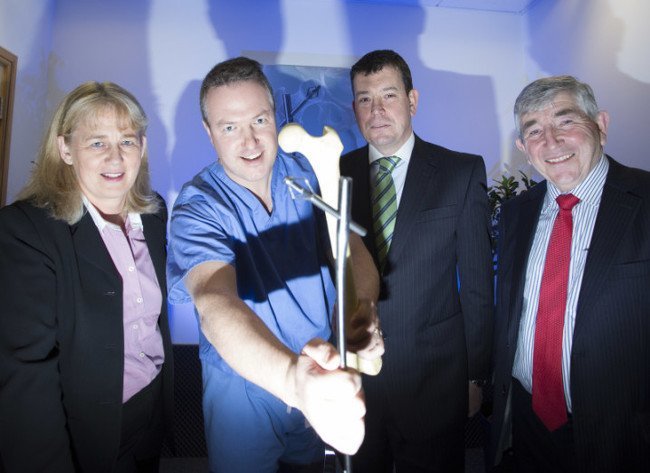