A research group at RCSI is developing an implantable mixture of two materials naturally found in bone – collagen and hydroxyapatite – with a microstructure that encourages the body to grow bone tissue.

You probably don’t spend too much of the day thinking about your skeleton – unless something goes wrong. If bone gets seriously damaged through injury or disease, it can sometimes mean getting a bone graft to help the repair.

Bone grafts and substitutes come in many flavours, but Prof Fergal O’Brien and his tissue engineering research group at the Royal College of Surgeons in Ireland have come up with a new twist: an implantable mixture of two materials naturally found in bone – collagen and hydroxyapatite – with a microstructure that encourages the body to grow bone tissue.

The technology, HydroxyColl, has now been licensed to spin-out SurgaColl Technologies for commercialisation, but it took a while to get to this point.

It all started when O’Brien, a native of Rosemount in Co Westmeath, was an undergraduate in engineering at Trinity College Dublin and he took an interest in the mechanical properties of bone.

“Other people in my class were doing projects looking at how metal parts break, but I started working on how bones break,” he recalls.

I started working on how bones break

That led to a PhD on the biomechanical properties of bone in osteoporosis, where bones can become fragile and susceptible to fracture. Then O’Brien moved to Boston on a Fulbright scholarship to work at Harvard and MIT in the area of tissue engineering, which seeks to encourage repair in the body after damage.

While in Boston, O’Brien attended human anatomy classes and, to his surprise, engineering lecturers were teaching the medical students.
“For me it was a moment,” he says. “I began to think maybe if I do go back to Ireland and take an academic position it doesn’t have to be in the engineering school.”

O’Brien did return to Ireland, and it wasn’t to an engineering school: he started as a lecturer in the department of anatomy at RCSI.
A President of Ireland Young Researcher Award in 2004 through Science Foundation Ireland (SFI) meant he could set up a tissue engineering lab and he started to look at how three-dimensional collagen scaffolds could be used in bone grafting.

Part of the lab’s work focused on fundamental “blue-sky” research, and his team characterised the properties of the collagen scaffolds and their ability to encourage bone growth, but there was something missing.

The material needed more support, so O’Brien got funding from Enterprise Ireland to explore how adding hydroxyapatite, a stiffer material naturally present in bone, could work.

“I knew I didn’t want to develop a ceramic material with some collagen in it; that’s what everyone else was developing,” he says.
“For 20 years people had focused on the stiffness of bone graft substitutes, but they forgot about the biological properties. We knew we had good biological properties but we needed to improve the stiffness and so we put in the hydroxyapatite.”
It wasn’t just a case of throwing it into the mix: the micro-architecture of the material could have an important effect on how the implant would perform in the body.

And to his delight, O’Brien found that they could engineer the hydroxyapatite particles into the collagen in a way that meant the resulting material seemed to stimulate the development of bone tissue.

“The way the hydroxyapatite is presented in the scaffold, it gives a signal to the body’s own cells to facilitate repair,” he explains.
“That means when you put it into a site it will recruit cells to enhance regeneration.”

Eight years after the basic science project got going at RCSI, co-inventor Dr John Gleeson from the group is now in the role of chief technical officer in SurgaColl and the company recently announced it had attracted more than €2 million in investment from a funding syndicate including AIB Seed Capital Fund, Harmac Medical Products, Enterprise Ireland and a number of private investors in the UK, France and Singapore.

While O’Brien now acts as an adviser to the company, his focus is still very much on doing the science behind innovations that he hopes will also go on towards the clinic.

He secured European Research Council funding to look at using the implantable scaffolds to deliver agents such as genes and stem cells to help repair bone and other tissues, and he is involved in a translational project supported by SFI and the Health Research Board to bring cartilage repair technology closer to the clinic.

And with his own research running from fundamental or basic through to commercial or applied, O’Brien doesn’t believe we should be drawing lines between the two polar ends of that spectrum when it comes to funding scientific research in Ireland.

“It’s critically important that if we are looking at application-focused research that it is based on fundamental good quality science,” he says.
“In the current climate it’s understandable that research is being funded with an economic return of some sort in mind, but it does take time so it should be a long-term goal. We can’t cut off funding for basic research – excellent science will ultimately produce the best technologies.”

SurgaColl, a spin-out of the Royal College of Surgeons in Ireland (RCSI), has closed a €2 million syndicated investment round involving AIB Seed Capital Fund, Harmac Medical Products, Enterprise Ireland and a number of private investors in Britain, France and Singapore. The AIB Seed Capital Fund, co-managed by Enterprise Equity Venture Capital, has completed a €500,000 equity investment in SurgaColl. 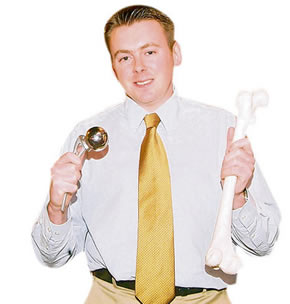