Former innovation awards finalists, how far have they progressed since ?

The 2012 finalist X-Bolt Orthopaedics produced a novel device for use in bone fixation in osteoporotic hip fractures. Traditional internal fixation uses bone screws that depend on the hold of the screw threads.

The X-Bolt works in a similar fashion to a masonry or plasterboard rawl-plug bolt that expands to grip within the bone and thus gives a much stronger hold and rotational stability.

X-Bolt founder, orthopaedic surgeon Dr Brian Thornes, got the idea for the invention when he was installing a wall-mounted flat-screen TV in his home.

“You needed expanding rawl plugs to fix it to the plasterboard wall,” he says. “Many elderly people’s bones are soft and crumbly and this makes them similar to plasterboard in consistency and causes fixation problems for traditional screws. I set up the company to develop the X-Bolt in 2007 and spent the next few years on its research and development.”

Progress has been slow and steady since the awards, according to Thornes.

“We have done quite a bit since 2012 and recorded some big milestones. We have done a big clinical trial involving more than 100 patients in the UK, we are developing a full portfolio of products for hip fracture treatment and we have raised €2.5 million in funding since then – €1.8 million of it last year. We now employ eight people, that’s doubled since 2012. We know that a lot of our ships are going to come in this year.”

Perhaps the clearest sign of success for a company in this sector is when the multinationals sit up and take notice.

“A number of multinationals are starting to show signs of interest in the company and this may lead to one of them purchasing it at some stage in the future. Irish companies don’t really have the capacity to scale up and grow globally in this space.

“My own skillset is in innovation, R&D and new product development so, if the company is sold at some point, I will move on to develop something else. I am already part of the Halo Business Angel Network and I intend investing in another medtech company this year.” 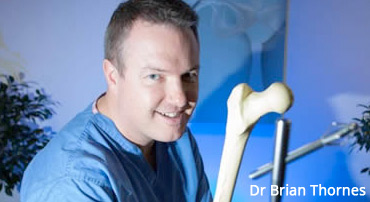